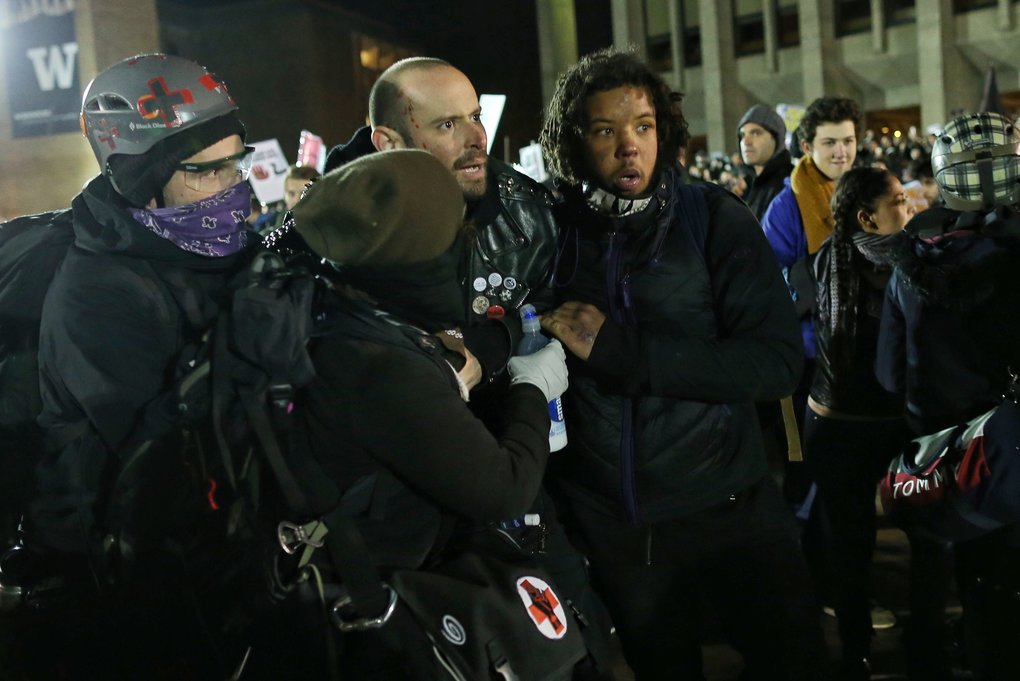 A man suffering from a gunshot wound is helped away from the scene in Red Square. (Johnny Andrews/The Seattle Times)

Update 1/23/2017:  Corrections: The SPD has been replaced with the UWPD, and the incorrect statement that firearms are forbidden by law has been replaced with reference to the campus policy banning firearms. Strikeouts are used to preserve transparency. We apologize for the errors and thank the public for their interest.

A pdf version of this press release may be downloaded here: gdc-2017-01-22-seattle-shooting-press-release-approved

SEATTLE, WA — The victim of the shooting at University of Washington’s Seattle Campus (UW-Seattle) on Friday, January 20, 2017, is a member of the Industrial Workers of the World (IWW) and the IWW’s General Defense Committee (GDC), an anti-racist and anti-fascist organization. He was present at the protests against Breitbart News editor Milo Yiannopoulos on Friday night to oppose Milo’s hateful speech, which encourages violence towards marginalized groups, and has resulted in actual violence in the past. The victim spent the period prior to being shot de-escalating conflicts between protesters and counter-protesters.

The shooter is unknown to the public at this point. Despite using a firearm against another unarmed citizen in a place where firearms are against university policy, the University of Washington Police Department (UWPD)  released the shooter shortly after he turned himself in. It is unclear to us that this is standard UWPD  practice. We do not yet know the real motivations behind the actions of the shooter at Friday’s protest. We do know that he brought a loaded weapon on the UW’s campus, into a protest situation. We understand that this is already a violation of University of Washington policy. We do know that he claimed self-defense against a person who was explicitly there to de-escalate violence, and that the shooter appears to have a considerable amount of confusion as to whom he shot, since he claims to have thought the victim was himself a white supremacist. The shooter displayed a serious lack of responsibility by possessing a loaded firearm onto UW’s campus in a protest situation, and even more when he used it. We do not understand the rationale for releasing this man.

The victim is a 34-year-old man from Seattle who has been a long-time anti-racist and anti-fascist activist. The shooter has apparently claimed that he shot the victim in ‘self-defense.’ The victim was unarmed and attempting to de-escalate conflict at the protest. We request that the press not identify the victim by name. The so-called ‘alt-right’ is notorious for creating virtual mobs to harass those with whom they disagree. The press should resist unintentional collaboration with these tactics. We recognize the pressure for the media to get stories out early and first. We request that the media engage with the victim directly, when he is recovered sufficiently to do so. In the meantime, please refrain from repeating the shooter’s claim that the victim was a white supremacist, without qualifying it with our statement.

The greatest needs for our member are of course personal, physical, and emotional. But the financial needs will be great. Supportive members of the public can donate to the shooting victim’s recovery fund at the internet address below.

We are deeply saddened by the attack on our friend. We are saddened but not surprised that the police released the attacker so swiftly.

For more information or to receive contact information for our press representative, please send an email to the press contact for this issue, Sam Wagner (sam.wagner@protonmail.com).

To donate to the victim’s medical funds, please visit: https://www.crowdrise.com/medical-fundraiser-for-iww-and-gdc-member-shot-in-seattle

14 thoughts on “UW-Seattle Shooting Victim is Anti-Racist Organizer; Victim was de-escalating conflict at protest when shot”